…earthmen on a fabulous, peril-journey into outer space: SLOMATICS – ‘Estron’ 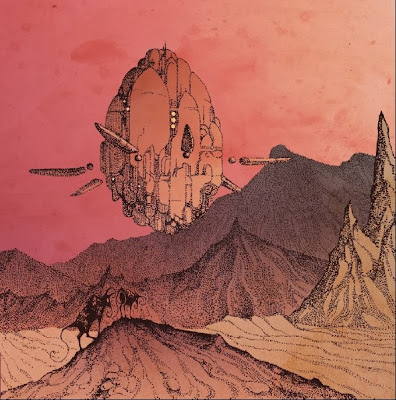 Cataclysmic in scope and tumultuous in execution, Slomatics are about to drop their fourth full-length, ‘Estron’, the follow-up to their stellar 2012 down-tuned masterpiece, ‘A Hocht’. In terms of sheer mass and amplitude, Slomatics inhabit and reign over a kingdom all their own—a kingdom subjected to whirlwinds of swirling noise, destructive upheaval of seismic reverberations, and a percussive storm at the hands of a howling tyrant from within the eye of the storm. ‘Estron’ is a worthy heir to the throne that was won and occupied by ‘A Hocht’ (review HERE).

This time around the Belfast three-piece has incrementally reigned in some of their atmospheric aural experiments—particularly the instrumentals—in favor of a more straight-forward, bludgeoning sonic assault resulting in a completely immersive and hypnotic listening experience. The album opens with the feint sound of a whirling wind blowing over a desolate alien landscape before beginning its battering with “Troglorite”. The album’s first track is a monolithic slab of interstellar doom—the military field music of an alien invasion.

“Tunnel Dragger”, one of the strongest tracks of the album, features the band’s signature rumbling guitar tone and is, at times, reminiscent of ‘A Hocht’s’ “Flame On”. Though there are moments where the riffs sound a bit similar, “Tunnel Dragger” distinguishes itself with its compelling, cacophonic vocal melodies and a spacey lull of percussion and extraterrestrial noise. Killer, spaced-out weirdness grows in intensity after the tune finally roars back to life.

Coming from the Conan school of inner core-dwelling guitar tone is the album’s excellently titled fourth track, “Lost Punisher”. Truly a lumbering, brutish beast of a track producing some of Slomatics’ most earth-quaking, low-end rumbles. Not only do the riffs issue forth as if they were entombed in the center of the Earth, but so do the slightly muffled and distorted vocals.

Hearkening back to the atmospheric elements of ‘A Hocht’ are the closing tracks of “Red Dawn” and “The Carpenter”. “Red Dawn” is a dread-inducing instrumental of piano and interplanetary interference that builds up to, and ultimately morphs into, “The Carpenter”. The ominous build-up turns into a sludgy crawl for one of the band’s longest tracks to date. “The Carpenter” is a heavy, slow-moving tune with the planetary mass of a derelict satellite floating through space.

Slomatics have once again delivered and, based on the strengths of ‘Conan Vs. Slomatics’, ‘A Hocht’, and ‘The Future Past’ single (review HERE), expectations were through the roof. The seven tracks of ‘Estron’ are interconnected and bleed into each other for what could be, essentially, a near forty minute trip through the outermost reaches of the galaxy. The band has continued to push their sound and their extremes while managing to remain as heavy, if not heavier, than most of their down-tuned contemporaries. While it would be difficult to claim that ‘Estron’ is in any way superior to the masterpiece that was ‘A Hocht”, it easy to say that it is just as good. Out soon on Head Of Crom Records. 'Estron’ is essential listening…

Email ThisBlogThis!Share to TwitterShare to FacebookShare to Pinterest
Labels: Slomatics